another month, another canning challenge. this is my second attempt at jelly-making and my first with pomona pectin. i am in love. talk about product performance-what a concept: this stuff delivers on it’s promise, which is to gel or set your mixture and not to add preservatives, additives or unneeded extra sweeteners. now, on to the jelly itself. this month’s challenge provided a choice between asparagus or rhubarb. since my last two canning choices were more of the savory variety, i decided on rhubarb.

now, i don’t what your experience with rhubarb is, but mine is nil. nada. nuttin’ doin’. never touch the stuff. actually, it kind of freaks me out. i mean, check out this creepy picture and tell me you won’t have haunting dreams tonight. i knew enough about it not to touch it while i was chopping it up; it stains everything it touches. being a nurse is handy as there are always a box of gloves hangin’ around for duties like this. as i was making pictures of it, i softened a bit toward it’s rugged good looks. the deep color and striations and such started to grow on me. i read sweet stories on the internets about fond memories of grandma handing her little ones raw rhubarb stalks dipped in sugar as a special springtime treat. all manner of people were baking it in pies and cobbler, stewing it to serve in a fool or with some delicious grilled or roasted meat product. these people must have known what they were doing, right? and no one was poisoned, once they figured out not to eat the leaves, right? right.

i followed pomona’s instructions for fruit ratio, pectin amounts, and the like. the flavor profile is way more hibiscus than rhubarb, most likely due to the fact that i did not get a whole lotta juice from those stingy stalks. i had to supplement much more with steeped hibiscus than i had initially planned. this beauty will most likely end up on my next cheese tray.

clean and chop rhubarb into 1/2 inch chunks, discarding any browned or leafy portions. (yes folks, the leaves are poisonous). place in a large pot with a cup or two of water and simmer until softened. add a large handful of hibiscus flowers during the last minute or so of cooking. the longer they steep, the darker the jelly will be. at this point, i whirled the mixture in the food processor but i wish i hadn’t. it became almost too thick to strain and i only got about a cup and a half of liquid through it. strain through multiple dampened layers of cheesecloth for at least 2 hours and up to 24 hours.resist the temptation to press on or push the liquid out. rumor has it that this will cause the jelly to become cloudy because, inevitably, some solids will end up getting through as well.

measure the amount of liquid strained and bring an amount of water that would bring this to a  total 5 cups. for example: my 1 1/2 cups of strained juice had me bringing 3 1/2 cups of water to a boil. add another large handful of hibiscus flowers to the boiling water for just about 30 seconds or so and strain through another few layers of cheesecloth. add this hot liquid to your juice. rinse out your pot, add the liquid, lime juice, and calcium water and bring to a boil. measure out your sugar into a bowl and add the pomona pectin, stirring well to combine. add the sugar and pectin to the boiling mixture all at once and stir for a minute or two until the pectin is well dissolved. bring mixture back to a boil and add additional sweetener if desired. if i had it to do all over again, i would have added some honey at this point to round out the sweetness.

ladle into sterilized jars and process in a hot water bath for 10 minutes.

i floated a few flowers on top  but most did not stay cenetered. i am ok with this. 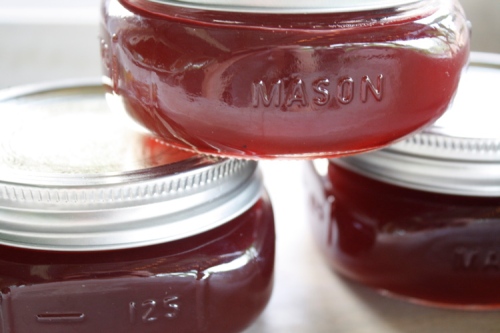